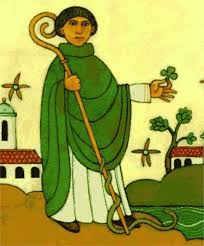 “I am Patrick, a sinner, most unlearned, the least of all the faithful, and utterly despised by many. My
father was Calpornius, a deacon, son of Potitus, a priest, of the village Bannavem Taburniæ; he had a
country seat nearby, and there I was taken captive.
I was then about sixteen years of age. I did not know the true God. I was taken into captivity to Ireland
with many thousands of people—and deservedly so, because we turned away from God, and did not keep
His commandments, and did not obey our priests, who used to remind us of our salvation. And the Lord
brought over us the wrath of his anger and scattered us among many nations, even unto the utmost part of
the earth, where now my littleness is placed among strangers.
And there the Lord opened the sense of my unbelief that I might at last remember my sins and be
converted with all my heart to the Lord my God, who had regard for my abjection, and mercy on my
youth and ignorance, and watched over me before I knew Him, and before I was able to distinguish
between good and evil, and guarded me, and comforted me as would a father his son.
Hence I cannot be silent—nor, indeed, is it expedient—about the great benefits and the great grace which
the Lord has deigned to bestow upon me in the land of my captivity; for this we can give to God in return
after having been chastened by Him, to exalt and praise His wonders before every nation that is
anywhere under the heaven.”

Daily Reflection
On the Horizon
Latest Posts
Associates help out in Southwest Baltimore
January 31, 2020
More News
Blog
Associates Embark on Lenten Journey
March 4, 2022
An act of kindness a day
December 9, 2021
What a wonderful couple of days!
October 21, 2020
More Posts
CONTACT US
If you have additional questions or would like more information about the Associates of the Sisters of Bon Secours, please contact us.
QUOTE
“I see that you are very hasty and impetuous and you wish that you would not have these very natural feelings; but that is not possible. As long as you are in this world, my child, you will have to struggle with your faults. You must accept yourself as you are, and to do this, you must ask God to fill you with His Spirit through your prayers and meditation. May it be this Divine Spirit who does battle within you and makes you victorious! Seek the glory of God and the salvation of souls in everything: it is the only thing necessary. As for your physical sufferings and all others, too, I will repeat St. Francis de Sales’ words to you: “Love your crosses, they are all made of gold and are the seeds of glory and unalloyed happiness.”
Mere Geay 2