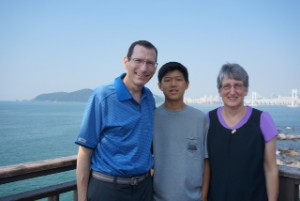 Dan Kirkpatrick is an ordained Lutheran minister (ELCA) and has been serving as chaplain at Bon Secours St. Francis Health System in Greenville since 2002.  He made his first commitment as a Bon Secours Associate with the “inaugural” group of Greenville Associates in 2007.

Dan’s introduction to the Sisters of Bon Secours was in 1989 during his Clinical Pastoral Education residency at Bon Secours Maryview Medical Center in Portsmouth, Virginia.  Dan recognized his connection with the Bon Secours charism during those two formative years.

Dan and his son Eli

Dan and his wife celebrate their 24th wedding anniversary this August.  Sherryan, who is also a seminary graduate, expresses her gifts for ministry through her work as a K-5 (kindergarten) teacher.  Their one child, Eli, is 15 years old and a rising sophomore in high school. Lola, their miniature schnauzer, constantly reminds all of them of the importance of celebrating life every day!

Daily Reflection
Expectation of Angels
Latest Posts
Associates help out in Southwest Baltimore
January 31, 2020
More News
Blog
Associates Embark on Lenten Journey
March 4, 2022
An act of kindness a day
December 9, 2021
What a wonderful couple of days!
October 21, 2020
More Posts
CONTACT US
If you have additional questions or would like more information about the Associates of the Sisters of Bon Secours, please contact us.
QUOTE
"So many thoughts fill my heart, now that I am about to leave…for this distant land....but I trust in God...So I am setting out, feeling happy to do His will, and committing myself anew into the hands of His Divine Providence."
Sr. St. Ferdinand LaHalle, d. 1889