When we have our eyes and ears tuned to how the sacred shows up in the ordinary, we can find ourselves challenged by stories (fictional or not) that invite us into deeper application. Below, you’ll read a reflection written in the spirit of our weekly communal prayer time.

Our Monday evening Community Nights are times set aside when BSVM staff join the Ministry Volunteers to eat dinner, pray together, and reflect on some aspect of shared life together. Volunteers lead the communal prayer times on a rotating schedule throughout the year. The shape of these prayer times can vary as widely as the personality of each Volunteer. Read on to see how Patrick weaves in the gospel reading from one of our communal reflections with some entertainment he and his community members watched together over the year.

Believe: A Challenge to Forgive
By Patrick Kollman, BSVM 2021-2022
A graduate of the University of Notre Dame

Over the last few months, our BSVM community has been gathering a few times a week to watch Ted Lasso together. The show is about an American football coach with an infectious positive attitude, who is hired to coach an English football club (soccer) with no knowledge of the sport he is hired to coach. Over the course of the show, Ted’s persistent positive attitude goes from simply hilarious and amusing to a moving and powerful force, both for motivating his team to win against all odds and accompanying his friends through personal challenges.

Ted illustrates an incredible capacity to carry out one of Jesus’s most important and challenging teachings: forgiveness. At a recent community night, a night during which BSVM volunteers gather to pray as a community through reflective practices and Scripture, we focused on our shared call to forgiveness. In the passage we read from the gospel of Luke, Jesus teaches a reluctant Pharisee about God’s love through His forgiveness of a “sinful woman,” saying that “her sins… have been forgiven; hence, she has shown great love. But the one to whom little is forgiven loves little” (Luke 7:47). Jesus offers this woman—who faces scorn from wider society—a spot at his table and forgiveness of her sins. He teaches that this act of compassion, which the woman may have not deserved, is what inspires her to love. We are all sinners, and what Jesus teaches here is that God ultimately forgives us even though we may not deserve it, and that we are called in turn to be forgiving of others, even if it seems they don’t deserve it.

Some of the most important and inspiring surprises in the plot of Ted Lasso stem from his capacity to forgive (warning: spoilers ahead!). Ted is initially hired (unbeknownst to him) to embarrass the football club that he coaches by his incompetence. Towards the end of the first season, after he has caught everyone by surprise with his mild success, the viewer realizes that guilt will soon motivate the club’s owner, Rebecca, to confess the truth to Ted. After scenes illustrating her stress about confessing this hurtful reality to Ted, she finally breaks it to him. During this build-up, I thought about how Ted might react–would he quit? Be broken down by the betrayal of someone he’d been so kind to?

None of the above! In this anticlimactic scene, he immediately forgives her. Near the end of season 2, Ted is even more seriously betrayed; a close friend on the coaching staff, in whom he confided about his personal struggles with mental health, leaks these struggles anonymously to the press. When Ted finds out who the culprit of the leak was, my mind immediately went to retribution. I thought it was certain that Ted would at least fire this coach from his staff and communicate how betrayed he felt through a stern talking-to. It felt as though the coach in question deserved punishment. But instead, Ted covers for him when others sought retribution. He feels pity for the hatred in that coach’s heart, and seeks the coach’s best interests instead. Ted illustrates vividly what I believe to be at the heart of forgiveness as Jesus teaches: that we ought to view those who make mistakes (i.e. all of us) as broken and in need of healing. Forgiveness provides healing, while retribution continues cycles of hate.

Learning from Ted’s example, I seek to foster an instinct of forgiveness in myself and for my community mates whom I watched Ted with. Of course, this extends beyond situations where I am deeply betrayed by a close friend like the examples from the show. It can teach us to extend grace when a little is needed. If someone is rude, give them the benefit of the doubt. If somebody needs space, give them space. If someone isn’t able to pull their weight one week, extend grace and pick up their slack. Ted shows an ability to treat everybody, even those who wrong him, as a vulnerable person worthy of love. Each of us has a lot to learn from this, and being a little more like Ted in this way can make our community more loving and healing for all of us. 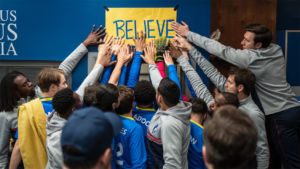 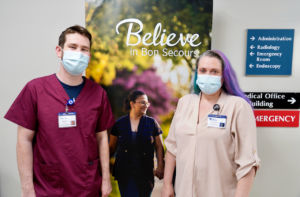 Patrick and his Site Supervisor at Richmond Community Hospital