Finding a Family in Perfect Strangers
By Julie McCracken, 2012-2013 Volunteer
A graduate of College of the Holy Cross

Before I started with Bon Secours Volunteer Ministry, I was told that one focus of the year was “living simply.” In the interview process, all applicants are asked what those words mean to them. During my interviews, I really only understood living simply in terms of myself. I understood that I would learn to spend less and that I would creatively find cheaper things to do. I envisioned myself focusing on things that don’t require money; spending my evenings with the community, really taking the time to learn about social justice in West Baltimore, and using more time to reflect.

As I had imagined, I certainly had to do these things. With our stipend, it was imperative that we make intentional choices about how to spend money, and to consciously choose to spend more time “simply.” Much more significantly, though, I learned that living simply is not a private process.

Perhaps it was the influence of our society, which stresses independence, or the privilege of growing up in the middle class, which allows for financial privacy, but something had led me to assume living simply was an individual endeavor. As I continued my term as a Bon Secours Volunteer, I came to understand how living simply requires me to rely on others.

Since we were no longer able to afford everything ourselves, our community was taught to all contribute part of our stipend for groceries and other expenses. Although it didn’t take me too long to understand that leaning on my volunteer community is similar to counting on family, one event especially helped me extend that realization to the wider Baltimore community.

One particular morning in May, three of my community members and I were driving to the nearby Target when our car drove over a rake that was lying in the road. The tell-tale hiss of the tire forced us to pull over on the side of a road that was unfamiliar for us. If we had had the money, we would have almost certainly chosen to call a tow truck, fix the tire on our own, and avoid any interaction with the surrounding neighborhood. Instead, before we even had the time to talk about our options, someone who lived down the road had already pulled over. Without hesitation, he asked us if we needed help. The man, named Fleetwood, proceeded to help us by providing extra tools, knowledge, and a reference to a local shop where we got the tire patched. This hour of his time was an unbelievable help to us, and something which we could never have done on our own. When we asked to make it up to him, he rejected all of our suggestions and replied with: “just pay it forward.”

That day, I unconsciously realized that living simply means learning to rely on others. This doesn’t just include those in my family or in my close community, but it requires looking to the wider human family. I learned this from Fleetwood and from people like him. Throughout this year, we met an abundance of people who were more than willing to step in and help without a second thought. Fleetwood’s help might have seemed small to him, but it was invaluable to us.

Because of our commitment to living simply, we were compelled to be open and to trust others with our needs. Benefitting from the generosity of Fleetwood and all those like him that I met this year, I now have a better idea how to give and to receive help from all my human family. 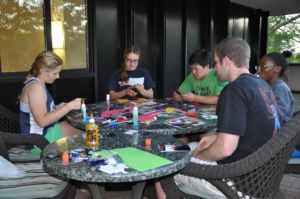