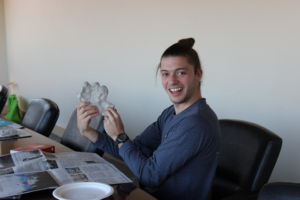 Who has modeled being ‘good help to those in need’ in your life? Describe why you are inspired by this person.

Since the day I was born, I have seen both of my parents, Celeste and Stephen, model what it means to provide help for those in need.  During infancy I was already joining them on Saturday mornings at the Middletown Community Garden.  While tending to the garden hoping for the plants to grow, I was growing internally in my understanding of the various experiences humans have in the world.  I became aware of the presence of inequality, of the reality that there are those in need.  Working the garden was a tangible action through which I found myself able to offer help by growing healthy fresh produce for others.  Along with this good, my parents illustrated the importance of being with others.  The garden was a social space in which socioeconomic barriers were broken down and genuine conversations flourished.  After realizing the various realities that humans face, I grew through these conversations and saw the commonalities we all have as a part of our shared human experience.

What is your favorite song or book and why does it speak to you?

Every summer, the Cremin-Endes family hops in the car and drives four hours to Orleans, Massachusetts.  Back in 2008, the plan was no different; the trip was punctuated by a stop at the Sagamore Bridge.  We hopped out of the car, blueberry buckle in hand, as we looked over the canal and saw the other side: Cape Cod!  After a year of waiting, we had finally arrived.  I had already looked up the schedule for the Cape Cod Baseball League months ago and knew which nights the games would be played.  It was at one of these games that I ended up purchasing my favorite book, called “The Last Best League,” a memoir of the 2002 Chatham A’s Cape Cod Baseball League season. While sitting on the beach that year I excitedly read through novel; this would be the first of many times doing so.  While previously I would have to wait a full year to be back on the Cape, through the book I was able to arrive at my favorite place in the world within a page.  As I have grown, I have continued rereading the story, with each edition adding a new flavor and reflecting my personal growth.