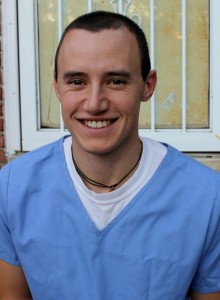 At the end of February, the hospital implemented an Electronic Medical Record (EMR) system. It was a particularly hectic and stressful time for a majority of the staff. Since most of the staff have been consumed with figuring out the details of the new system, I feel as if my job is more important than ever to spend time with patients and accompany them during their ER experience.

One such patient was brought into the ER by ambulance with panic attack symptoms, including having difficulty breathing. She was an incredibly sweet woman, and so I was drawn to her room frequently to sit and chat with her. She shared with me that she was very frustrated because her nebulizer machine at home was not administering her medicine properly, and she felt like it wasn’t working. She had called her insurance company to ask if they could help her, but she was told that they couldn’t do anything for her unless she had a prescription from her primary care doctor. Becoming frustrated and anxious, she explained that she did have a prescription. However, when she becomes anxious she begins to slur and stutter, and the representative at the insurance company could not understand what she was asking. To make a long story short, she asked if I could help her obtain a new machine, and I said I would do whatever I could to help her.

When I went back to her room a short while later, she was still waiting for the doctor so she could ask for assistance with the nebulizer machine. While I was there, the doctor came in to check on her and it was at this time that the patient began experiencing the onset of another panic attack. The doctor worked through it with her, calming her down enough to ask her what we could do to help her. Since she was having trouble forming coherent words due to her panic attack, she asked me to help explain her case to the doctor since the patient had already explained it to me. I explained to the doctor the issue with the nebulizer machine, as well as the panic attacks that she was regularly experiencing. The doctor said she would set the patient up with an appointment at the primary care clinic at the hospital, as well as give her information to see a psychiatrist to help figure out the panic attacks. After the doctor left the room, I stayed to make sure the patient was okay. She gave me a huge hug and simply said “thank you.”

I can’t pretend to know what any of the patients that come through the ER are going through, but what I can do is accompany them while they are in the ER and let them know that they don’t have to go through the experience alone.