Our Blessed Mother has so many titles and I was not familiar with the one “Our Lady of Bon Secours” /Good Help/Good Aid until I started work at the Bon Secours Hospital in Glasgow.  For quite some time now because of my association with the Sisters, I had wanted to visit the Cathedral in Scotland dedicated to Our Lady of Good Aid .  The church is located in North Lanarkshire in a town called Motherwell, approximately twenty miles from Glasgow.  The town itself used to be the center of steel manufacture in Scotland which at its peak employed over 13,000 people.  Like many heavy industries in central Scotland, manufacturing declined dramatically in the 1970’s and the principal steel plant in Motherwell closed in 1992 and has mostly been demolished.

The church was built at the end of the 19th century, designed in Gothic revival style by Pugin & Pugin who built many renowned churches in Britain.    The church opened in 1900 as a parish church but when the diocese of Motherwell was created after the Second World War, it was consecrated as a cathedral in 1948.

I had planned to visit on May 24th, the feast of Our Lady Help of Christians, but this year it fell on Pentecost Sunday.  Nevertheless,  Sr. Ann Campbell,CBS,  and I made the trip for vigil Mass on Saturday 23rd May which turned out to be quite an occasion.   The Mass was con-celebrated by the Bishop, Joseph Toal,  with the two priests resident in the parish.  The choir was in good voice accompanied on the organ which has  recently been refurbished and is the largest church organ in the West of Scotland.   At the end  of Mass,  a parishioner  was awarded a special medal for services to the diocese.  The people were exceptionally warm and friendly and interested in the reason for our visit.

One of the interior features that  struck me was the inscription of the words of the Magnificat around the walls at their juncture with the roof.  I felt enveloped in those wonderful words. 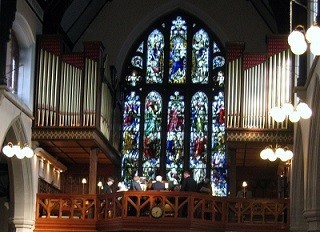 There is also an impressive memorial to St John Ogilvie whose 400th anniversary of martyrdom was commemorated extensively in Scotland in March 2015.

By one of those strange coincidences, I have just discovered that the grandfather of one of my friends carved the Bishop’s chair. I had no idea her family were from the town.

I have yet to discover the reason why the church was dedicated to Our Lady of Bon Secours but will continue my research.  I am not sure either of the origin of the name Motherwell, whether the “mother” refers to Our Lady or not (more work to be done!).

A lot has been done recently on refurbishing the precinct around the church and funding has been obtained to create a garden. The work on this  is just beginning so we hope to return next year on May 24th with some of the other Bon Secours sisters from Glasgow to see the completed garden.

Although there is a church of Notre Dame de Bon Secours in Brussels, where I lived for several years, I did not have occasion to visit it until a return visit some years ago after I became an Associate.   It is a 17th century baroque church tucked away behind the Grand Place, the capital’s historic main square that dates from the same era. . The interior is quite simple with a 14th century wooden statue of its patron.

The only other chapel dedicated to Our Lady of Bon Secours that I have visited, is the one in the Mother House in Paris.  There are others I hope one day to visit, notably in Montreal, Canada and the shrine in Wisconsin.   In each I will say a special prayer to our patron asking her to continue to bless the members of our congregation, strengthen our charism of compassion, healing and liberation and intercede in our prayers to her Son that others will answer the call to bear witness in the world to the great love of God.