Sister Dorothy Brogan has been a Sister of Bon Secours for 60 years. She grew up in Philadelphia and when asked why she became a Sister, she says it’s hard to describe because it was a little “muddy” in the beginning. She went with a friend to meet the Sisters of Bon Secours in Darby, PA where they were taking care of retired priests. She said what touched her most was the simplicity and humanness of the sisters. 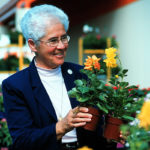 Sr. Dorothy says she started praying to God to guide her, and a priest encouraged her to follow her heart. When she finally got the courage to voice that becoming a Sister was something she wanted to do, she says her family didn’t think she would ever last in the convent.

After she entered, she became a nurse and over the past 60 years has had a rich background in hospice, palliative care and home health. She’s currently a Chaplain at the Cancer Center at Bon Secours St Francis in Greenville, SC. When she’s not in ministry, Sr. Dorothy likes to be outdoors or listening to classical music, reading and spending time with friends.

Her advice to anyone considering becoming a sister is to pay attention to the nudges. She says find someone to share with who can listen objectively. Sr. Dorothy says sometimes when we talk out loud, we can hear more clearly what’s going on inside.